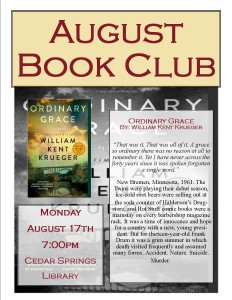 Join us Monday, August 17th at 7:00pm for the Book Discussion of”

“That was it. That was all of it. A grace so ordinary there was no reason at all to remember it.

Yet I have never across the forty years since it was spoken forgotten a single word.”

New Bremen, Minnesota, 1961. The Twins were playing their debut season, ice-cold root beers were selling out at

the soda counter of Halderson’s Drugstore, and Hot Stuff comic books were a mainstay on every barbershop magazine rack. It was a time of innocence and hope for a country with a new, young president. But for thirteen-year-old Frank Drum it was a grim summer in which death visited frequently and assumed many forms. Accident. Nature. Suicide. Murder.

Anybody use our Book Swap⁉️GIVE A BOOK. TAKE A BOOK.No need to tell the circulation desk or check out! ... See MoreSee Less
View on Facebook
· Share

llc.bibliocommons.com/list/share/1891409529_cedarsprings_admin/2251673309_february_is_black_histo...Use Bibliocommons to browse our collection and/or sign into your account: llc.bibliocommons.com/Below we have listed some books highlighting the triumphs and struggles of African Americans in U.S. history to honor Black History Month. Currently all books on this list are available to checkout inside the library. ... See MoreSee Less

February is Black History Month by CedarSprings_Admin - a staff-created list : Browse the collection at the Cedar Springs Public Library highlighting the triumphs and struggles of African Americans throughout U.S. history.
View on Facebook
· Share

Just a reminder for those signed up that our Cupcake Wars is tomorrow evening starting at 6pm! Registration is full. *Cupcakes are pre-baked, contestants will have the opportunity to fill/decorate their cupcakes using an assortment of flavors/jelly/frosting etc. Be sure to come with your creativity! ... See MoreSee Less
View on Facebook
· Share